The kilt is a knee-length non-bifurcated skirt-type garment with pleats at the rear, originating in the traditional dress of men and boys in the Scottish Highlands of the 16th century. Since the 19th century, it has become associated with the wider culture of Scotland in general, or with Celtic (and more specifically Gaelic) heritage even more broadly. It is most often made of woollen cloth in a tartan pattern.

Although the kilt is most often worn on formal occasions and at Highland games and sports events, it has also been adapted as an item of fashionable informal male clothing in recent years, returning to its roots as an everyday garment. 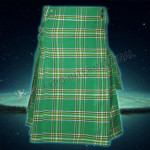